Freeride windsurf spots are popular because they offer the best windsurfing holidays for all abilities and styles. But what are the top places for freeride windsurfing? And what windsurf destinations stand out from the crowd for recreational windsurfers? 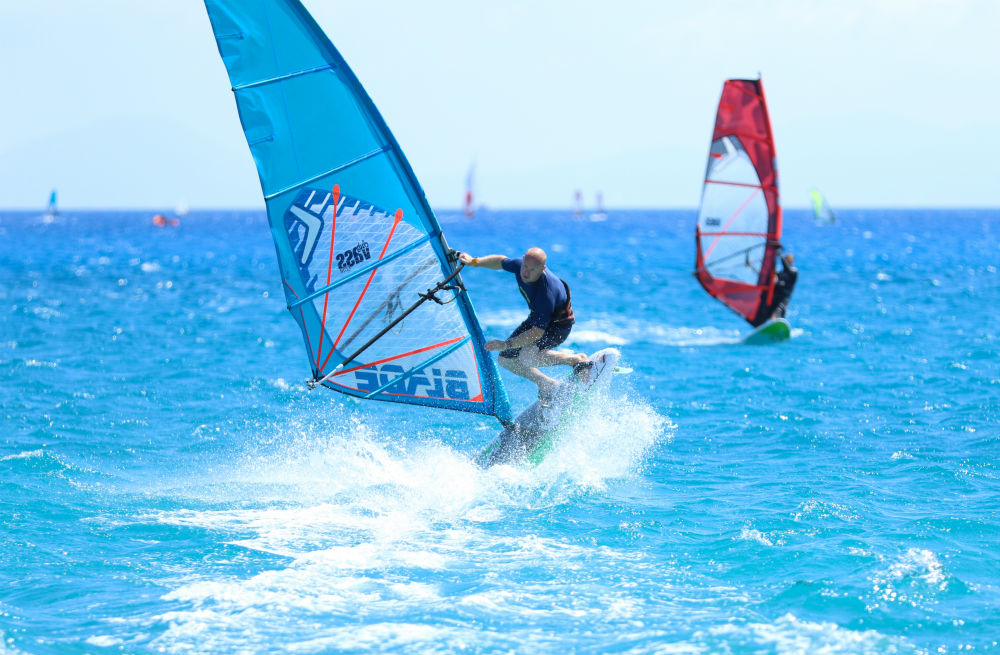 Best windsurfing holidays for all

Freeride windsurfing is defined more by the gear you use than how you sail it, as the equipment is designed to be easy to windsurf rather than high performing. It’s also made to do a little bit of everything, so sailing at speed, performing small tricks and riding medium sized swell is all possible.

Essentially freeride windsurfing gear is made for recreational windsurfers who love the sport but are not planning to race, ride big waves or bust out huge tricks. That’s not to say a good windsurfer won’t make a freeride rig perform, but that they would choose a different setup when riding a particular style.

With that in mind what do you want from freeride windsurf spots to make them a favourite? Warm water, side offshore breeze with pumping swell. Or butter smooth flat seas with palm trees swaying gently to the rhythm of reggae beats. The answer’s different for everyone so the top spots have to offer a bit of everything. 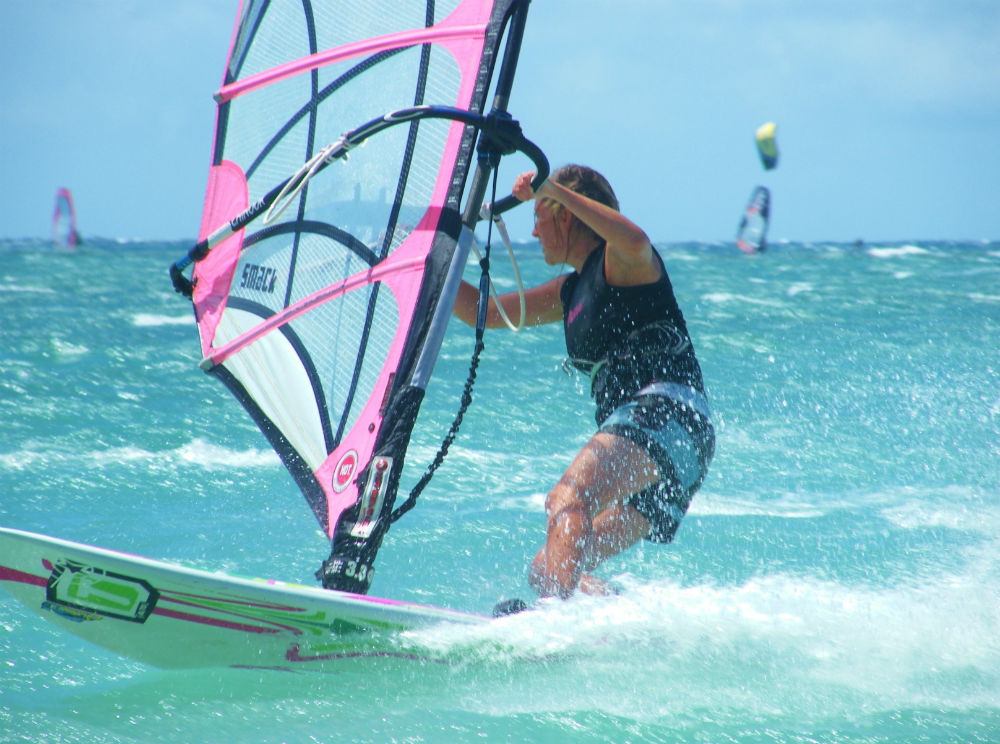 So if you’re looking for the best windsurfing holidays for all levels of windsurfer you should look at the top freeride windsurf spots. Places where you can do a bit of everything. Where beginners can find their feet, recreational windsurfers can have a good time and experts have plenty to keep them interested.

So we hit up Tez Plavenieks, editor of British windy magazine Windsurfing UK, to find out what freeride windsurf spots make his bucket list. The following top five are destinations for the best windsurfing holidays for all levels and styles. Basically his favourite spots for a bit of everything.

Vassiliki, or Vass as it’s more commonly known, will be familiar to any active windsurfer. Needing no real intro Vass Bay is synonymous with freestyle and freeride sailing, the notorious afternoon thermal cross-shore wind kicking in to make it an all comers playground.

Practice your carve gybe technique or bust a shifty with some of the best UK tricksters. Then round off proceedings with a few cold ones, watching all the action from the beach. 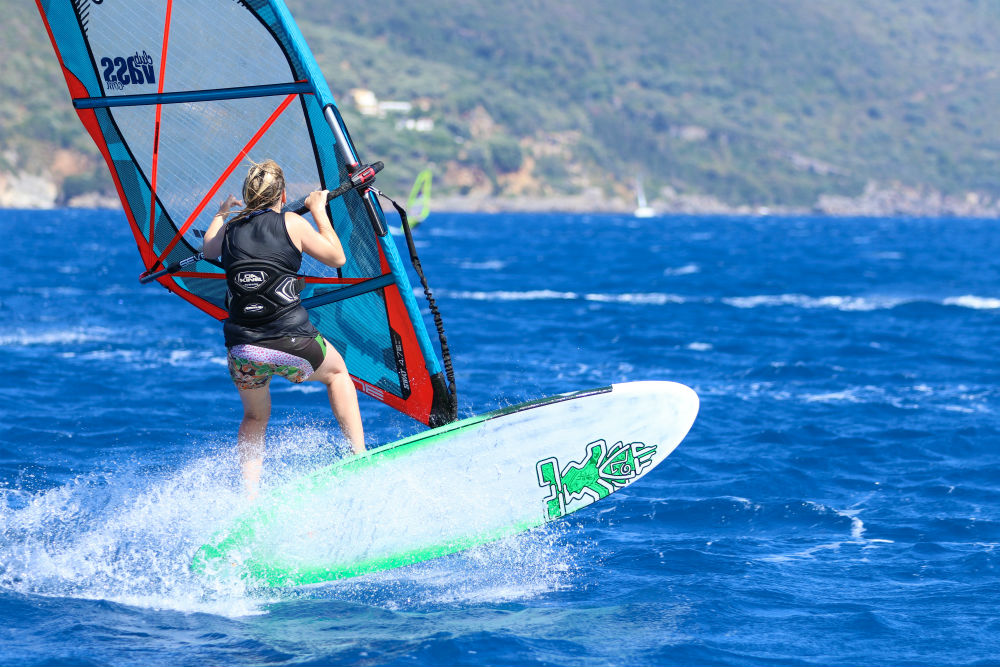 If you’re a family then Vass offers the perfect place for mum and dad to nab some water time while the kids play on the beach. Safe, welcoming and buzzing is the general vibe you’ll find if hitting up Vass.

A recent discovery of mine Sardinia offers great freeride/freestyle options at most spots, with the opportunity of wave sailing when forecasts really turn on. Capu Mannu is a world class point break that can test the best whereas Porto Pollo, in the north, is super popular and less threatening. There are more options available, however.

We got chance to visit Neilson Holiday’s new set up in Bai der Mori which offers accessible conditions for most skill levels. During our stay we had a decent hit rate in terms of breeze – a trend that’s reportedly continued as the season has worn on. Check it out for something different. 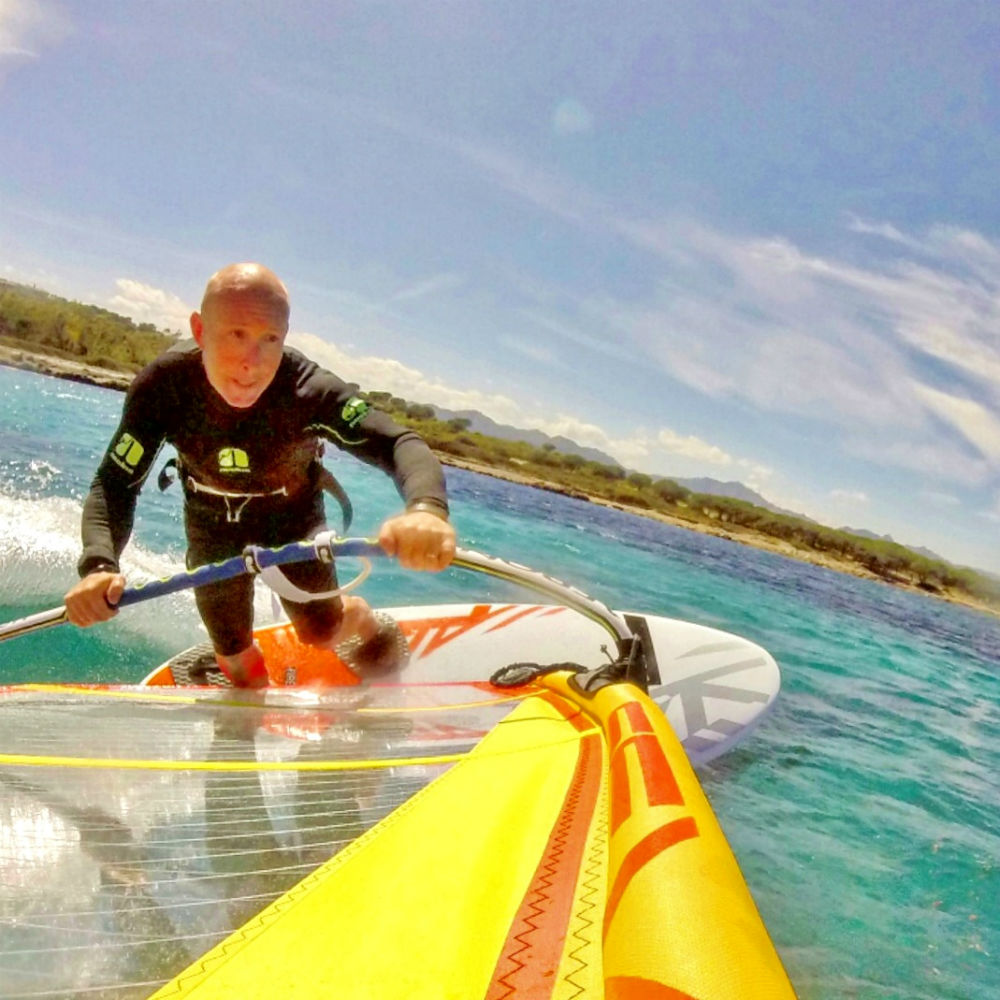 Rather than one specific spot Fuerteventura offers two locations to suit all types of windsurfer. Flag Beach in the north, 10 mins outside Corralejo, offers everything from big, but soft, waves to flat water bump and jump style conditions.

Flag’s vast sandy expanse leads to some of the most beautifully coloured seas you can imagine. Add to the mix a regular summer Trade Wind, with pretty consistent winter blows, and you can see why Flag Beach attracts large numbers of sailors each year.

In the south you’ll find the World Cup event site at Sotavento. It’s not unusual to get nukin’ winds down here as gusts funnel between the surrounding hills and puff side offshore. 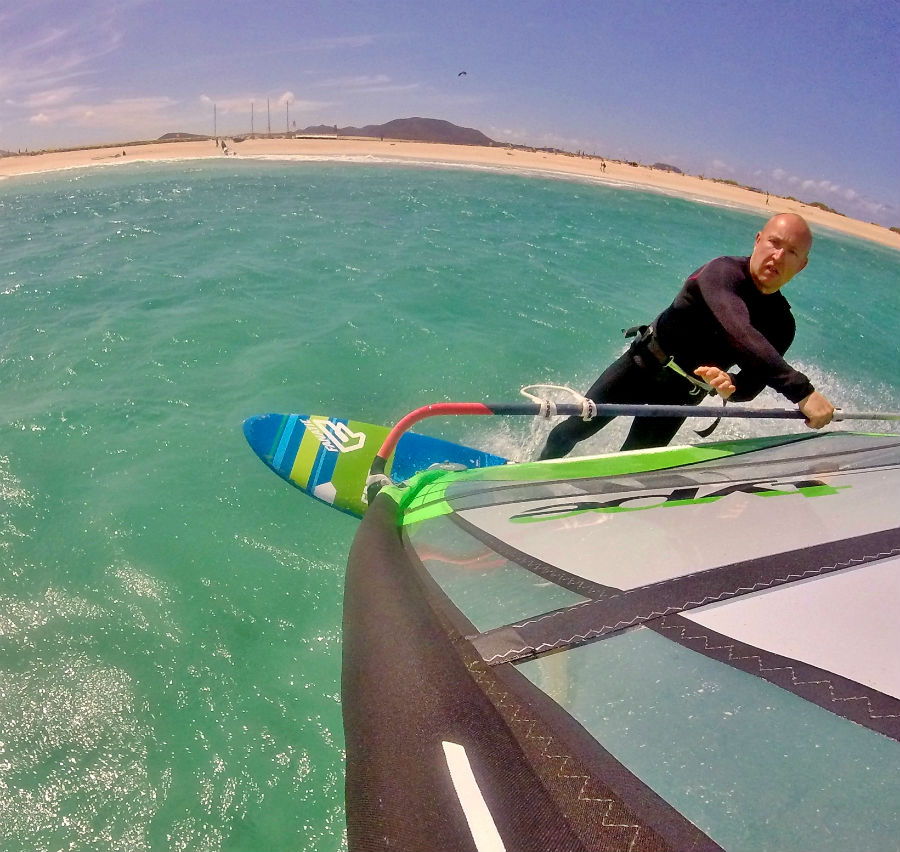 Sotavento offers some shorebreak, a tidal lagoon, with flat to choppy seas on the outside to make this a venue suitable for slalom, freestyle and a great freeride windsurf spot. Beginners would also do well during lighter wind periods.

Lanzarote often gets overlooked in favour of its south sitting sibling. But Costa Teguise, in the NE of the island, is a reliable location for all manner of windy shenanigans. With a sheltered launch booting upwind and out to sea delivers riders to a playful reef break that although gets quite chunky isn’t as critical as elsewhere on the island.

What’s more is windies can sail just downwind of the reef and never be affected by the swell, instead simply making use of typical bump and jump conditions. 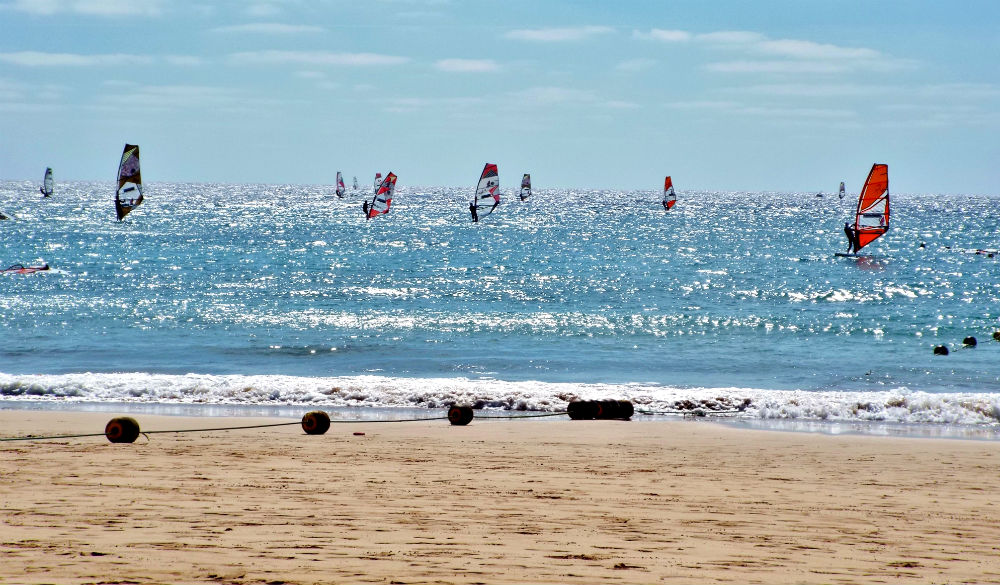 Summer sees winds at their most consistent, and side shore, while off season will have the biggest swells with a typically more offshore wind direction. Good for families with a white sandy beach and plenty of amenities close to hand Lanzarote provides one the best windsurfing holidays.

If you and your entourage are up for jetting further afield then consider Maui. Long known as a rite of passage for any serious rider Maui’s Ho’okipa wave spot is legendary with multiple pros basing themselves here.

Add to the mix Pe’ahi’s (Jaws) big wave spot just up the road and you may think the island isn’t for the feint of heart, which would be wrong. While Maui does indeed get battered by thumping swells in winter, summertime sees flatter seas and consistent Trade Winds puffing across the Pacific. 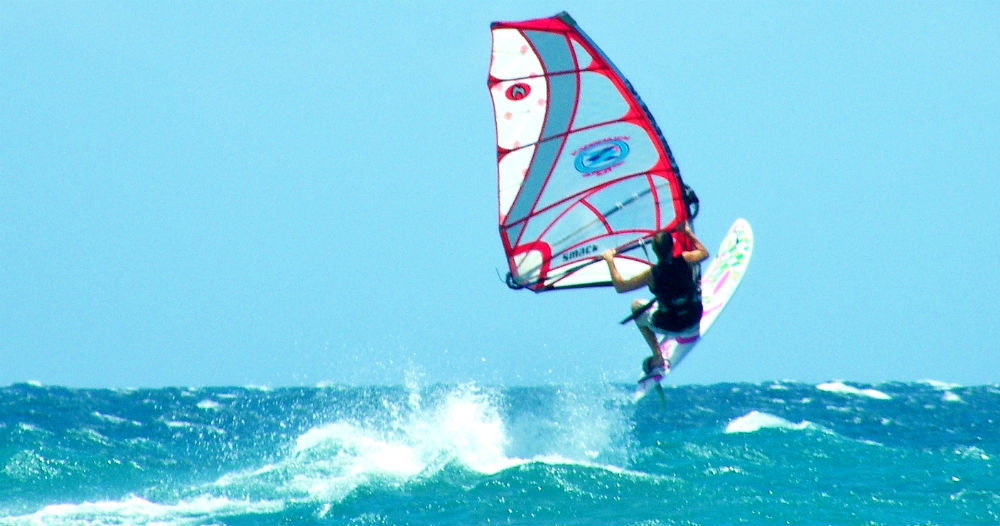 Kanaha Beach Park, whilst still a North Shore launch, boasts an offshore reef that protects it from swell and creates a flat water paradise inside. It might still get choppy but riders are able to blast about inside the coral without a wave ever touching their kit – peace of mind for progressing sailors and one of the top freeride windsurf spots.

As well as Maui being the epicentre of performance windsurfing it’s also a cool place to hang out and immerse yourself in Polynesian culture. Without doubt Maui offers one of the best windsurfing holidays for all levels and styles of windsurfing.

These are just a few of my favourite windsurfing locations, there are plenty more available, some lesser known than others. Hit up Google for further info on freeride windsurf spots near and far.

Be sure to check out the AWE365 windsurfing discounts as you could save a fortune on your next holiday. 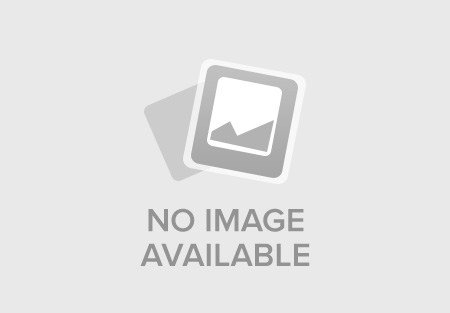 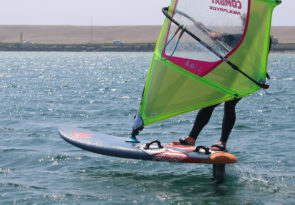 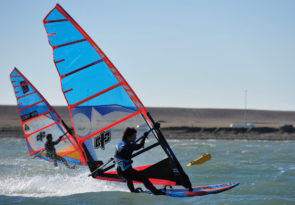 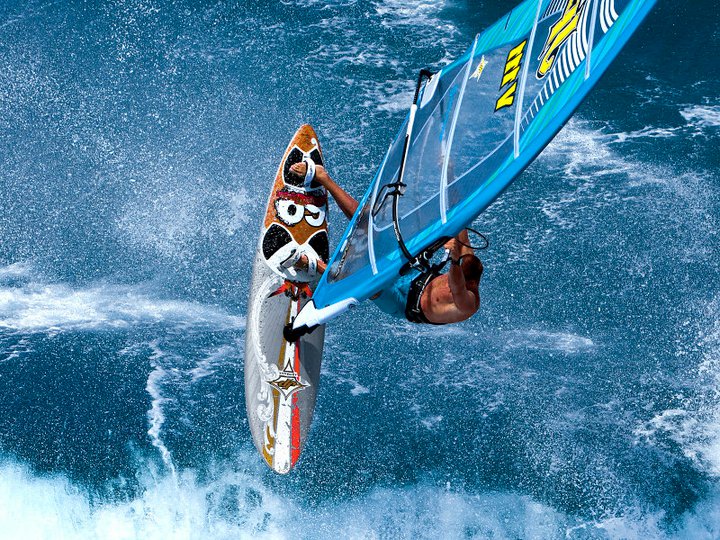