Writing a top 10 Europe surf destinations can be a tricky businesses there are many factors that have to be taken into account. Firstly I have to assume I am talking to a mixed bag of surfers, not all beginners are going to want to know where the best 18ft barrel is to be found and I can assume the Kelly Slaters out there are not looking for the location of the friendliest surf school.

Along with the surf in deciding this top 10 I have taken account of extracurricular activities for surfers to indulge in out of the water. Such as drinking and meeting people of the opposite sex. The beauty of the surroundings has also played a role in the selection of these surfing EL Dorados.

I feel that this top 10 Europe surf destinations, is arguably the most inclusive, unbiased and comprehensive Europe surf travel guide you will read. So lets start the count down……

The Brits got much of their exposure to the Atlantic’s waves block by Ireland – some say it was an act of defiance by the small nation….. All we know for sure is that most of the west coast is relatively surfless bar one little leg constituting the south west tip of the country – and this is where’ll you’ll find Newquay. 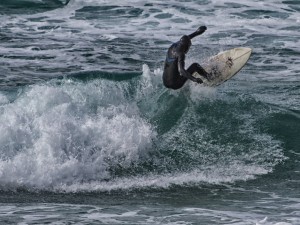 The famous Fistral beach is where you’ll find world class fast, hollow waves – although due to its fame you’ll find hoards of people to go with it. In and around Newquay there are a lot of other surf beaches to be explored, including many beginner spots and many surf schools. Summer’s great for beginners, while winter can churn out some powerful waves for the experts.

In Newquay you’ll find some a fine place to learn and from time to time there’s some world class swell. Also Newquay is a great place for a night out just ask one of the several thousand stag parties that pass through yearly. If you happen to call England home then Newquay is only a hop, skip and a jump away.

San Sebastian is a fantastic city. A great blend of new and old world, edgy city lifestyle and nightlife with  natural beauty abound and the great outdoors easily accessible. Plus did I mention there is surfing to be had. 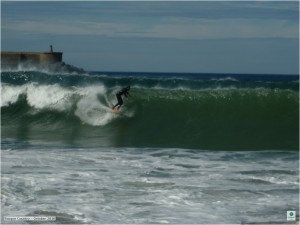 San Sebastian lies in Basque country just 20km from the French border. The city’s main surfing beach, La Gaviota, is in the centre of town and is flanked by surf schools on all sides. The waves in San Sebastian in the summer lend themselves very well to beginners and, like most spots in Europe, winter is the time to go if it’s monster waves you’re after.

There’s a lot to do and see in San Sebastian, including free summertime open air concerts on the surf beach. You can ride waves and listen to big names wailing it out on stage. San Sebastian is a must visit for surfers and non-surfers alike.

What is Iceland doing on a top 10 Europe Surf destinations? Out in the middle of the Atlantic seemingly closer to North America than Europe but European it is. This exotic land of Bjork, geysers, volcanoes and ice is bombarded with waves and has enough rough natural beauty to give a man an epiphany. 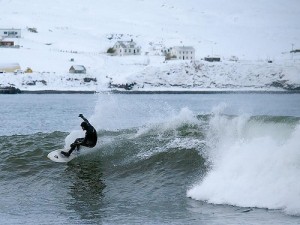 Heralded by many as Europe’s last wilderness, there’s a lot to be discovered. One home grown tour operator, Arctic Surfers, provides a surf adventure service to help avid cold water surfers. But a lot can be discovered by just hopping in a car and driving around the next glacier.

The best surf is to be found on the south east of the Island with big lumbering swells hitting the land at great spots such as Porlackshöfn and Hafnir. Both spots are less than an hour’s drive from the capital, Reykjavik, so they’re easily accessible. So grab your 6mm hooded suit and your thermal rashie (or even a drysuit!) and go get some frigid barrels.

Find out more about surfing in Iceland. 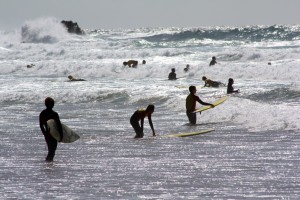 That bottom left hand corner of the Iberian peninsula is a sun kissed eden for surfers and general holidaymakers alike, and both head there in their droves. If you want to avoid the crowds there are plenty of reefs and beaches to keep surfers supplied with crisp new spots on a daily basis.

In the summertime the west facing beaches tend to churn out clean waist to chest high swells, though popular lineups can get busy. Either side of the summer is when the storm chasers will find the drama they’re looking for. Under a clear, warm autumnal sky beaches such as Carrapateira have been know to get surging 25 ft waves – attracting the pros from all over the world.

The best way to explore the Algarve and avoid the crowds is to hire a campervan.  Then you can go where the surf takes you, find your own perfect break and your bed will never be for away! We strongly recommend West Coast Campers as they provide simple to use campers at highly competitive prices. 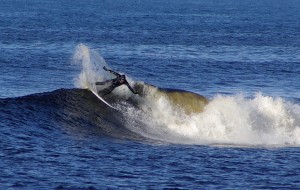 If it’s brooding cobalt blue northern seas, massive slabs of waves and adventurous isolation you’re after, Thurso might be your man. Lying almost as far north as you can go in the rocky fringes of the upper Scotland, this place is a primeval proving ground for hardy surfers from all over the world.

Thurso East is also home to the annual O’neill ‘Coldwater Classic’. A professional competition in which the winner, in a wonderful display of celtic mysticism, receives a sword. Thurso is where you’ll find Europe at some of its wildest in terms of locals, landscape, weather and waves. Only the very brave need apply.

Number 5 in the top 10 Europe surf destinations is another far flung Island that many do not consider European. Fuerteventura literally translates as ‘Strong Winds’ in Spanish. The good news is while it does tend to be a bit breezy, a good chunk of this wind is blowing lightly offshore onto world class surf.

The town of Corralejo is the heart and soul of the Island and amongst the pulsing nightlife teeming with tourists there are some fine waves to be found. Waves like the heavy right-handed Los Lobos with its breathtaking view of the volcano and it’s aptly named lefthand counterpart ‘Izquierda’ simply meaning ‘left’ in Spanish. Even the pros out there will have their hands full.

At the other end of the spectrum there are plenty of beginner waves for those learning and an abundance of surf schools to teach you. This sun kissed lump of volcanic rock will treat you to some great weather and world class waves all year round. 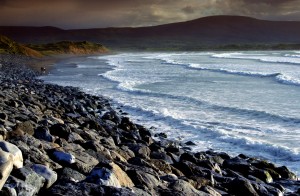 Sligo is one of Ireland’s most beautiful counties, and it also happens to be privy to some of the finest surf in Europe. With big, meaty reef breaks the likes of the lethal left hander at Easkey right beside the long, rolling beachbreaks of Enniscrone and Strandhill, you’ll be spoilt for choice.

All this watery adventure is set against a beautiful backdrop of wild west Irish landscape. Great pubs, interesting locals and all manner of tin-whistle playing paddywhackery. If you’re a soul surfing big wave charger, a keen beginner or even just a booze-hound masquerading as a surfer you’ll be sure enough to have a grand auld time in this welcoming fringe of Europe.

Peniche is a peninsula located roughly halfway down the Portuguese coast. This chunk of land jutting defiantly into the Atlantic works on almost every swell and wind direction making it one of the best Europe surf destinations for consistency. 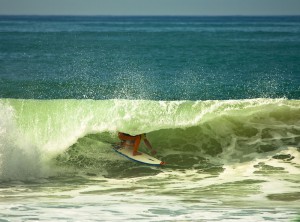 The surf schools in Peniche go for the gentle chest-high breakers of beaches such as the comparatively placid Cantinho da Baia, a slightly sheltered playground for beginners and intermediates. While just round the corner you’ll find the sleeping giant of Supertubos. This big fella requires a lot to wake him up, a two metre swell should do it, but when he does it’s a hell of a thing. These cavernous, hollow barrels attract the surfing pro tour every year.

The nightlife in Peniche is both understated and highly enjoyable. In the summertime the campsites fill up fast and there’s usually a bit of guitar playing bonfire action to be found. Midnight swims and urgent trysts are also a regularity. All the fine things to be expected from a good old fashioned surf trip.

This is a little seaside fishing village on the north coast of Spain that has been harbouring a secret for many years. Turns out this unassuming little Basque town has one of the most perfect waves in the world giving it number 2 spot on our top 10 Europe surf destinations. 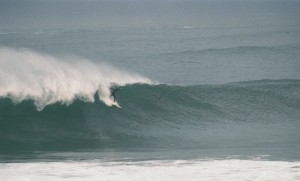 Lying at a river estuary the wave at Mundaka has a sandbar that jacks up a left hand wave that famously barrells for 400m or more. The wave also breaks right beside a beautiful old pier making for a perfect viewing platform for all your fans while you’re out tearing it up.

Mundaka’s pedigree is such that has been an on/off stop for the ASP surfing world tour for the last decade and a half. Although recently many have argued that the wave has suffered due to changes in the sandbar.

Whatever the case it’s still a magnificent wave to surf, and one of the best Europe surf destinations. Also it is a mere hour and a half from both Santander and San Sebastian if you’re in need of some revelry.

Biarritz and Hossegor is a paired seaside town not far from Bordeaux where the archetypal European surf holiday is to be found. A contented surfer can lounge around in the sun ogling the lithe bodies passing by, deciding every now and then to take a leisurely paddle in the warm consistent waves.

In the evening time this handsome part of the country offers a nightlife to be reckoned with. So after a surf just go to a bar and patiently wait for the nightly drink fuelled madness to get going. The climax of the season is in October when the French leg of the surfing world championships pass through Hossegor. The coast heats up for a few weeks of general hedonism before Europe shuts up shop for the winter.

We hope you found this top 10 Europe surf destinations useful in planning your next trip. Be sure to check out out surfing discounts as you could save yourself a fortune.