Snowboarding in BC: Canada’s Winter Playground

When the continental landforms under Canada shifted all those millions of years ago, a dramatic alpine terrain emerged that now seems as if it were tailor-made for snowboarding in BC (British Columbia). 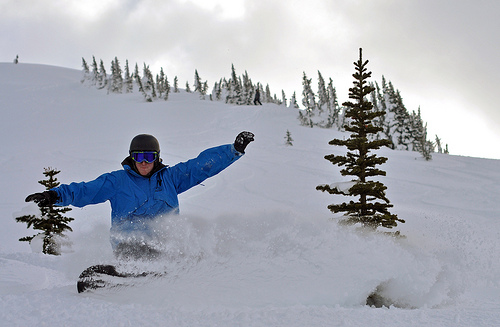 In resorts across the province, natural runs, bowls and gullies are complemented by man-made pipes, boxes and groomed snow. All of which adds up to a veritable theme park for boarders of all inclinations. These resorts all boast professional service, fun apres-ski pursuits and a friendly atmosphere.

The Canadian Rockies, Coast Mountains and Yukon Plateau all fall within BC’s boundaries – how lucky we are.

As soon as you start researching Whistler, you’ll be impressed by the mere look of the place. The way the snow slinks across its black twin peaks in January is a thing of beauty.

But once you’re on the powder, you’ll be wanting to emulate Travis Rice’s double back flip backside 180 on one of the 12 bowls available here.

If you fancy an alternative to snowboarding why not try an all-Canadian sled ride through the foliage-cushioned valleys? The sound of the huskies, the wind through your hair… there’s nothing quite like it as winter adventures go.

A mind-blowing 14,500 people a day head to Whistler for snowboarding, skiing and trekking, most of them via Highway 99 from Vancouver, which is 77 miles away.

Boarding with the Big Boys

Big White Ski Resort has a 2,550 foot vertical drop and enjoys 24.5 foot of award-winning dry powder a year – perfect conditions for snowboarders who want to carve the steep chutes of Gem Lake and frolic in the snowcross-oriented TELUS park.

The runs and jumps here are placed into clear categories to suit all abilities: intermediate, beginner and advanced.

Caution in the Mountains

On Big White snowboarders should watch out for deceptive tree wells formed by coniferous branches preventing snow from properly compacting. The Big White Ski Patrol has bases at Gem Lake, the Alpine T-bar and at the foot of the Ridge Rocket Express. The British Columbia Ambulance Service is also present.