Every snowboarder remembers their first drag lift, and most of us recall stacking it a few times before we got past the first support post. Big Mountain Extreme Sports know this pain so they’ve created Snow Tow, which is making drag lifts easier for snowboarders.

I have been snowboarding for around thirteen years, I consider myself an expert and long ago stopped avoiding drag lifts. But that does not mean I like them, more that I tolerate them. I still find them uncomfortable and secretly I am pleased when I reach the top without an incident.

I haven’t fallen off a drag lift for at least five years, but every season I have at least one ‘moment’ when I almost come a cropper. This reminds me of the early days when every button or T-bar was treated with dread, and reaching the top felt like a major achievement.

It only takes a moment’s lost concentration, your grip on the pole or back foot slipping, a dodgy patch of snow, or ski ruts to cause problems. Experienced snowboarders normally get away with it, but for a beginner that normally results  in an undignified ride back down to start again, or a long uphill walk of shame.

The hardest part of the drag lift is getting started. Grabbing the button or T-bar, placing it correctly between your legs and getting set on your board – all in a few seconds – is not easy. Your good work can then be undone by the sudden jerk as the drag lift starts to pull you up hill.

Allowing you to strap both feet in is one way of making drag lifts easier for snowboarders, however I get shouted at for standing my back foot in the binding without strapping in. I have no idea why this is a problem as some resorts are fine with you riding a drag with both feet strapped in.

Whatever the reasons snowboarders are at a disadvantage using surface lifts that are designed with skiers in mind. So Big Mountain Extreme Sports are making drag lifts easier for snowboarders by creating Snow Tow, the first universal surface lift adapter.

Snow Tow consists of a harness that goes around your waist and the thigh of your front leg – it is a little like half a climbing harness. You then have the main Snow Tow bracket that clips onto the harness level with your hip which simply slots over the t-bar or button without the need to put it between your legs.

With the Snow Tow pulling you from the outside of your front leg it makes you more stable and comfortable, plus it is much easier to get going. This is great for snowboarders as it alleviates most of the problems of getting started and staying stable. It is also good for kids as getting the button or t-bar between their little legs is extra difficult.

When you get off the surface lift the Snow Tow folds back into the harness to keep it out of the way. Alternatively you can clip onto your board where it acts as a stomp pad with a toe cap, this assists when your back foot is not strapped in, for example exiting a chair lift – another potential source of carnage for snowboarders.

Everything is designed so it is not possible to land on it if you fall. Furthermore the harness doubles up as a camera mount, so you can attached your action sport camera of choice in a more stable position than your head, that also gives an interesting different camera angle.

Thinking back to my early T-bar and button lift experiences, it would have been fantastic to have an easier way to use draglifts and to have a toe cap for the backfoot when exiting chairlifts. So Snow Tow is ideal for beginners and less experienced snowboarders, but also anyone with a dislike for surface lifts or who struggle exiting chairs would benefit.

My boys will be learning to snowboard in the next few years, so I appreciate anything that makes snowboarding simpler. So with Snow Tow by Big Mountain Extreme Sports making drag lifts easier for snowboarders I will be keenly keeping an eye on its development. 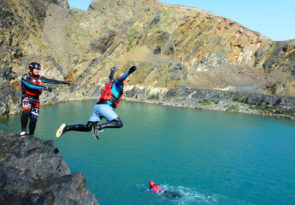 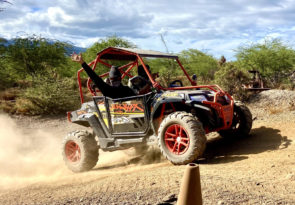