The final stop on our Pyrenees road trip was the Grand Tourmalet ski area, to conduct a review of La Mongie snowboarding. As a real treat we also spent a night on Pic Du Midi in one of Europe’s leading observatories. 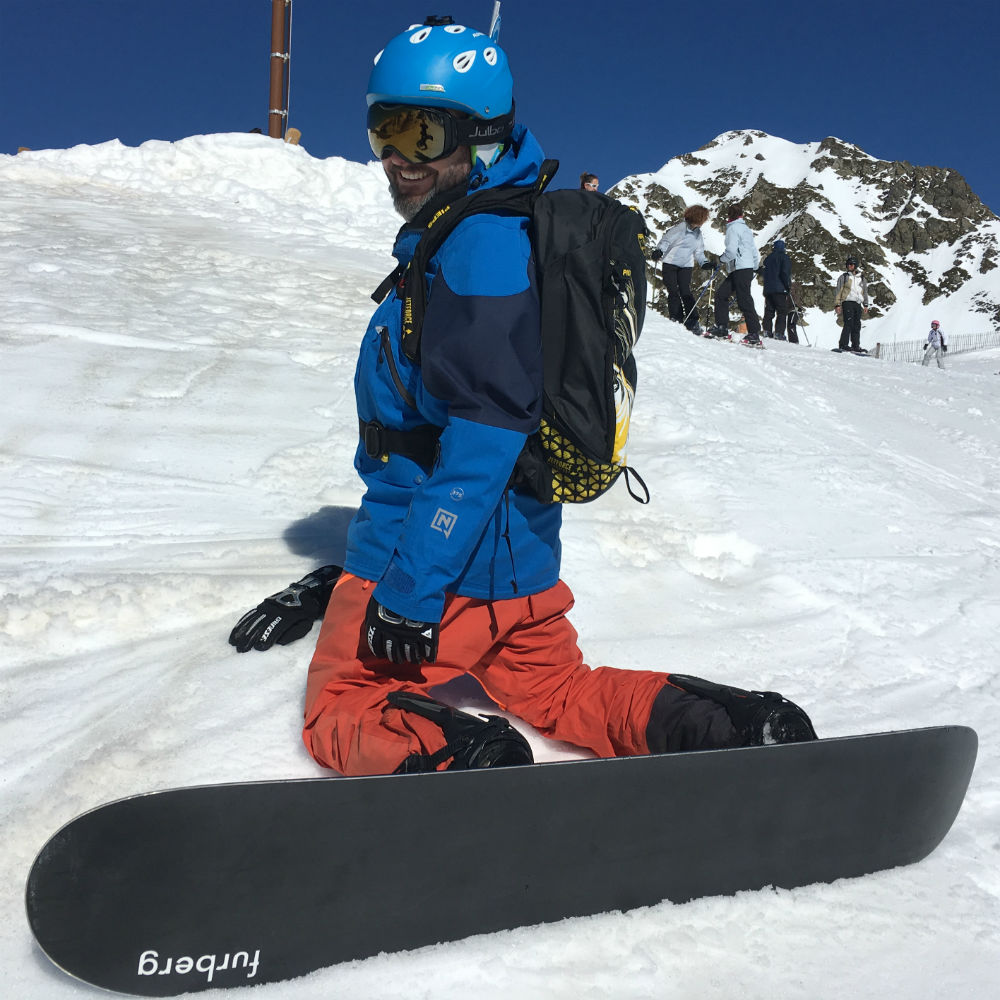 La Mongie is linked with Bareges which creates Grand Tourmalet, the largest lift linked ski area in the French Pyrenees. With 69 pistes and over 100 km of runs it reaches up to 2500m, so there was plenty to keep us busy for this review of La Mongie snowboarding .

Pic Du Midi rises above it all reaching 2877m. On top sits a planetarium and a number of telescopes that take advantage of the clear air and lack of light pollution. We were to spend a night on Pic Du Midi stargazing and planet watching, before snowboarding off-piste back to La Mongie in the morning.

The drive from St Lary to La Mongie is stunningly beautiful. You cross Col d’Aspin which provides excellent views of Pic Du Midi. If you have time it is well worth parking up, pulling on some hiking boots and going for a walk around here.

We arrived in La Mongie on the back of three days of temperatures in the high teens to early twenties. So we knew we’d be riding slush during this review of La Mongie snowboarding.

Being honest the town of La Mongie is not much of a looker. There are lots of big concrete buildings and unattractive car parking beside the pistes. The quickly melting snow did not help as there were brown patches all over the mountain.

But there was still plenty of snow on the pistes, so we put our gear on and hit the slopes for this review of La Mongie snowboarding. Our guide was a local rather than a ski instructor, so it was nice to see the mountain from a different perspective. 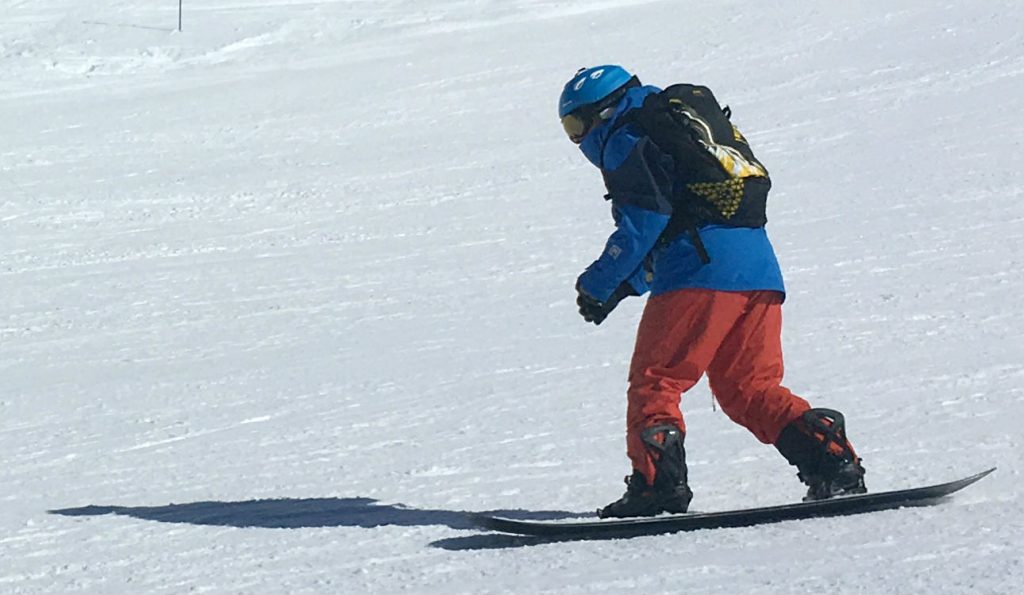 Although temperatures were warm, morning conditions varied from slush to ice, making for slightly challenging riding. The slopes were also fairly busy – more so than in other resorts we’d visited on this Pyrenees road trip.

We started by exploring the runs from the Sapins chair, where there are some good short reds and an easy blue. There are also plenty of beginner slopes in the area, plus a fairly challenging black run called Prade Verde (which we tried after lunch).

From here we made our way over to the Bareges side of Grand Tourmalet via the Chapelle and Pasade chairs and Tourmalet piste. It’s a long blue run with a few flat sections so keep your pace up. At the top of the Tourmalet run there is a snowpark, which unfortunately was closed. 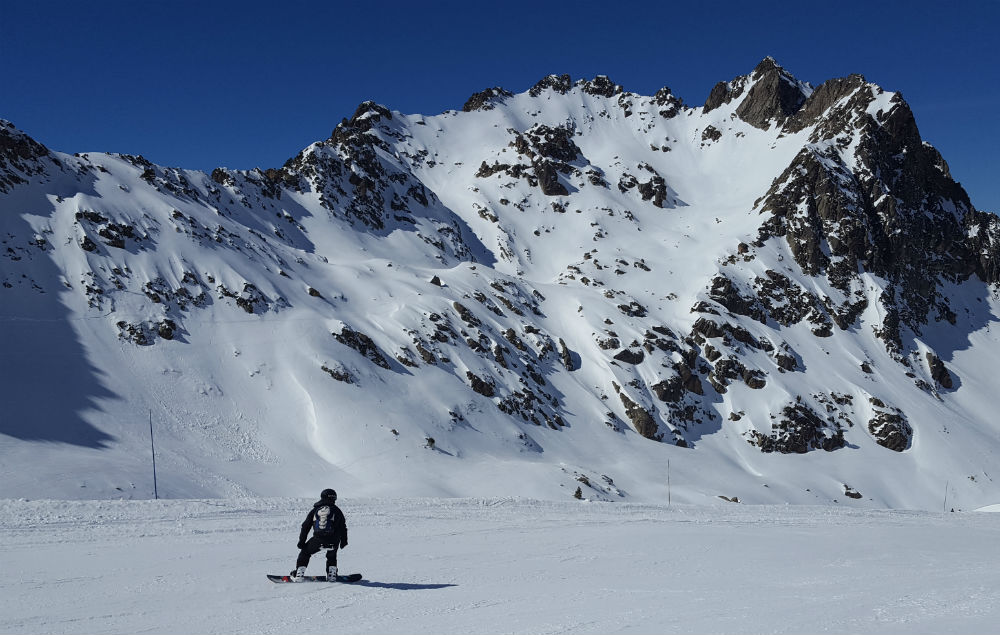 Before stopping for lunch we explored the Termes area – at 2500m it’s the top of Grand Tourmalet. It’s serviced by the hilarious Quatre Termes chair, a tiny 2 seater that picks you up faster than any other chair I have ridden. The exit at the top is just as pacey so make sure you’re prepared.

The blue run down from here was one of my favourites during this review of La Mongie snowboarding. Long, fairly steep for a blue, with sweeping turns and plenty of side hits make it very enjoyable to snowboard. The views were not bad either and being high up it was less slushy.

We stopped for lunch at a funky converted ski hut near the top of the Pourteilh chair. It’s perched in a great spot, with stunning views overlooking the runs down from Termes. In 20+ degree sunshine it was such a nice spot that we had a few beers to wash down the tasty burger. 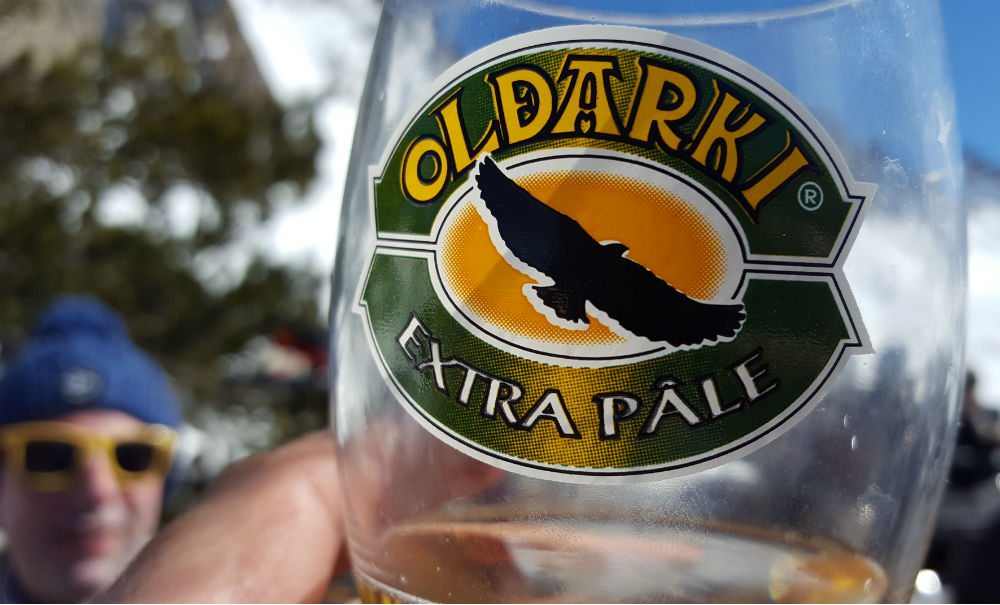 After lunch we used the Bernais and Panoramic chairs to reach the excellent Courme red run. We also took on the aforementioned Prade Verde black run. Following a few playful runs on the blue pistes around the Etape and Bernais chairs we called it a day, grabbed our things and headed up Pic Du Midi.

A huge highlight of this review of La Mongie snowboarding, was spending the night on Pic Du Midi to stargaze using the observatories telescopes. The evening certainly started very well with one of the most stunning sunsets I have witnessed, followed by a very good meal.

There is only room 27 people to stay on Pic Du Midi, so it is a very sought after experience. We were the only non-French guests, in the introduction talk our host spoke for about half an hour in French, followed by about a minute explaining the evening in English.

This pattern continued throughout the night on Pic Du Midi. Very long explanation in French and if we were lucky something short in English – but often nothing. I speak a little French so could understand snippets, but my friend couldn’t understand a thing.

Now I have no problem with the majority being in French – after all we were in France. But the night on Pic Du Midi experience is promoted in English on the website, so I feel more effort should have been made for us English speakers.

The host spoke very good English, so if he’d devoted just 10% of his time to English it would have made the experience much more enjoyable for us. I expressed this opinion to the tourist authority and was told they are putting systems in place to better host non-French speakers.

Moan over! Apart from the communication issues it was a wonderful experience. The rooms were basic, but clean and comfortable. I found the observatory history and its ongoing astronomy fascinating. Plus the views at sunrise and sunset were incredible.

Through the telescopes we viewed the moon up close and various distant galaxies including the colourful Orion nebula. We also saw Jupiter and Saturn in great detail, observing Jupiter’s spot and Saturn’s rings is something I will never forget.

Although I enjoyed the night on Pic Du Midi, I was more excited about freeriding the 2000m descent to La Mongie in the morning. By the time we met our guide at around 10am I had been up for six hours, having got up at 4am to watch Saturn rise…. 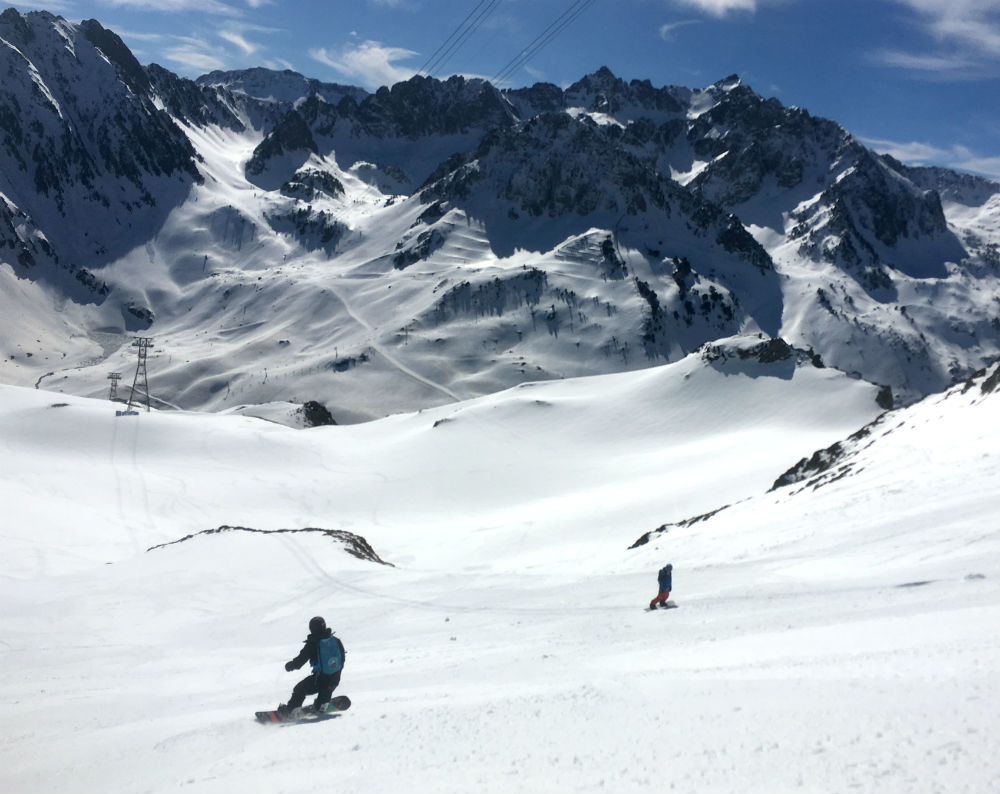 I’d had many coffees and been warming up for about an hour. To say I was eager was somewhat of an understatement. Unfortunately our guide had some bad news. Because it had been so warm the day before the slope would have refrozen overnight and was very dangerous.

He said the sun would not get on the slope until around 11:30, so we should not snowboard it until after lunchtime when it had softened up. As we needed to drive to Toulouse airport, leaving around 1pm, this would be cutting things very fine.

To check out conditions we walked to the start of the descent. Precariously climbing over the solid, rutted ice gave us a good feel for how difficult the slope would be. Worryingly the guide said a fall on the steep, icy beginning of the route down could kill you in these conditions. 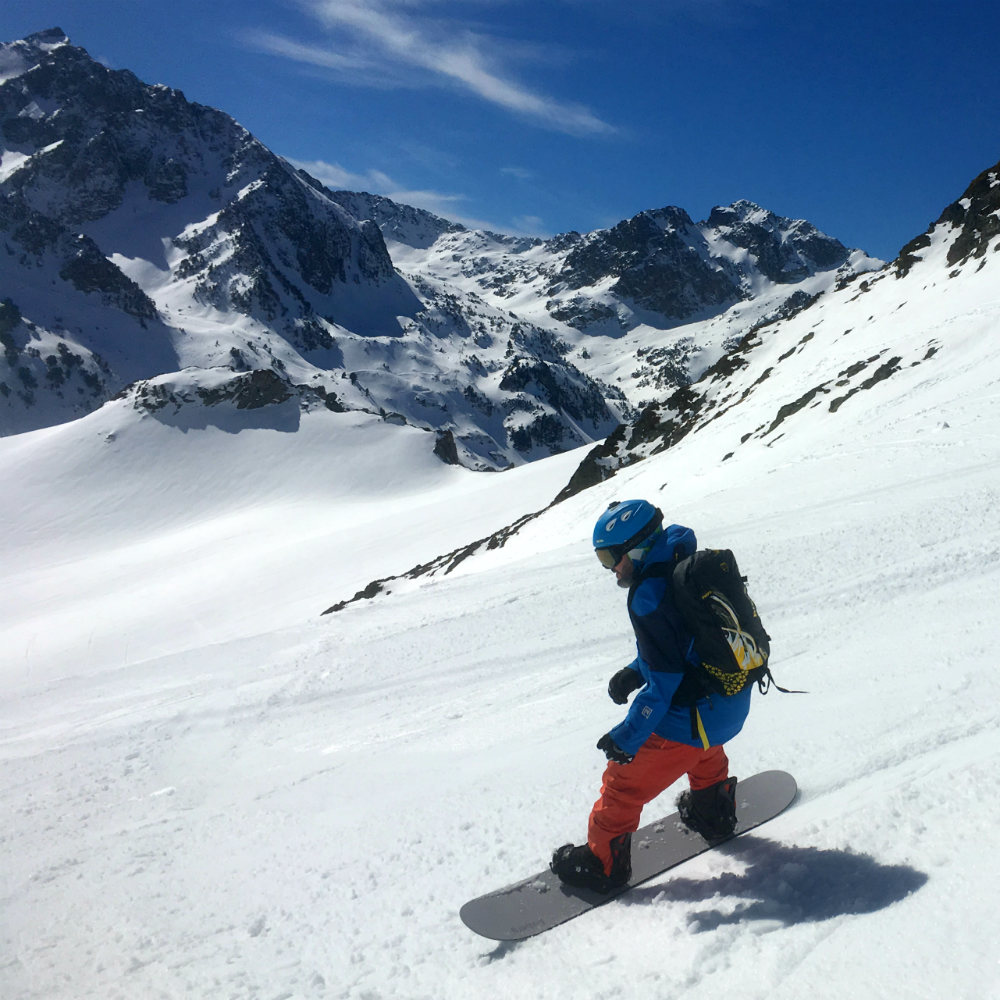 As we had hours to wait, we headed to mid-station to do a couple of freeride runs down into La Mongie. Even here conditions were not ideal, it was soft in places and rock hard in others. But it was a fun ride down with nice undulations and lots of space – in powder conditions it would be awesome.

Our guide said he felt that conditions from the top would only get as soft as we’d experienced lower down from around 12:30. As it takes 30 mins to two hours (depending on ability and fitness etc) to ride down we decided it would be cutting it too fine to make out flight.

So we did a few more freeride runs from the mid station before calling it a day. It was a good job we did, as getting back to the car, collecting our things from the Pic Du Midi lift and getting changed took an hour. So even if we’d ridden from the top in record time we’d still have been late for our flight.

I hope you enjoyed this review of La Mongie snowboarding. If you’d like to head to Grand Tourmalet go to: www.pyrenees-holiday.com/Grand-Tourmalet or www.grand-tourmalet.com and if you’d like to spend a night on Pic Du Midi visit: www.picdumidi.com. 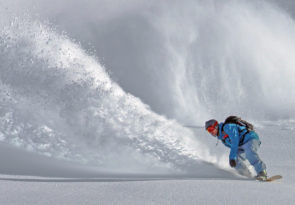 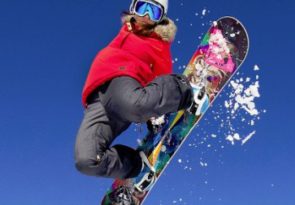 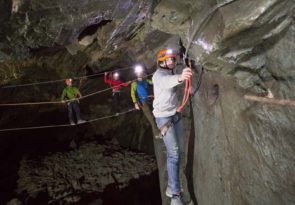