We are 1rst Dive Operator on Pulau Weh, Aceh - Indonesia. We concerned on the marine environmental. let's visit on Pulau Weh 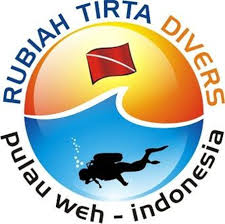 Back in 1970, Dodent, the founder of Rubiah Tirta Divers, was living and working on Rubiah Island with an English company trying to promote Pulau Weh and Aceh as a tourist location in order to protect the stunning marine environments in the area.

Since then, Dodent has been campaigning tirelessly and ceaselessly to protect these coral reef systems, helping to establish the Marine Park Status around Iboih and fighting destructive fishing practices such as dynamite, cyanide and shark fin fishing.

Now, having a string of qualifications and certificates in environmental awareness and protection (from over 6 different Indonesian Agencies and International NGOs), Dodent has also been awarded a special prize (in 1997) by the Indonesian Government in recognition of his efforts.

Working and diving from a live aboard yacht and sailing around the East Coast of Thailand, the Maldives, Malaysia and Singapore was the start of Dodent’s diving career. His work-mates had no trouble in convincing him of Pulau Weh’s obvious potential as an Asian diving Mecca and the necessity of caring for the reef.

Mr. Dodent was ready for the Grand opening of RTD four years later in 1989. Starting initially as a diving club for Indonesian commercial divers and also continued promoting Pulau Weh as a tourist location and the first adventurous travelers started trickling in.

Pulau Weh is a good atmosphere for everyone who like visit and there’s a lot of the coral reef include big fish. also it’s very friendly local people and hospitality.